In 2021, 18,984 children were born in Slovenia (9 per 1,000 population). The mean age of mother at all births was 31.1 years and at the first birth 29.6 years. These values ​​have remained unchanged for the last three years. The most popular name for new-born boys was Filip and for girls Ema.

58% of children born to unmarried mothers

13% of mothers with foreign citizenship

Some additional interesting findings for new-borns in 2021:

After 22 consecutive years, the most popular name for boys is no longer Luka, but Filip. This name was given to 264 new-born boys. The list of the top girls’ names is more varied and changes a lot. In the past 23 years, seven different names were ranked first, but in 2021, the name stayed the same as in 2020: Ema. The name was given to 248 girls. In addition to Filip and Ema, the top five names were Luka, Nik, Mark and Jakob for boys and Zala, Mia, Julija and Hana for girls.

50 mothers gave birth on their birthday, 11 mothers on the wedding anniversary.

Regarding fertility, there are significant differences between statistical regions. The fewest children per 1,000 population (7.7) were born in Obalno-kraška and Pomurska statistical regions, and the most, three more (10.7), in Jugovzhodna Slovenija. Jugovzhodna Slovenija has been the region with the highest fertility. Mothers who gave birth to the first child were in this region the youngest (28.8 years). They were the oldest in Obalno-kraška and Osrednjeslovenska regions (30.3 years). Traditionally, the region with the highest share of unmarried mothers has been Koroška (7 out of 10 children were born to unmarried mothers), and the region with the lowest share Osrednjeslovenska (5 out of 10).

Natural decrease the second largest since 1945

In Slovenia, natural decrease has been recorded every year since 2017, as more people die each year than are born. Natural increase was recorded in 2021 only in two summer months. The value of natural increase in 2021 was −4,277 or −2.0 per 1,000 population.

Tables on births and names and natural increase of population with the latest data are available in the SiStat Database. 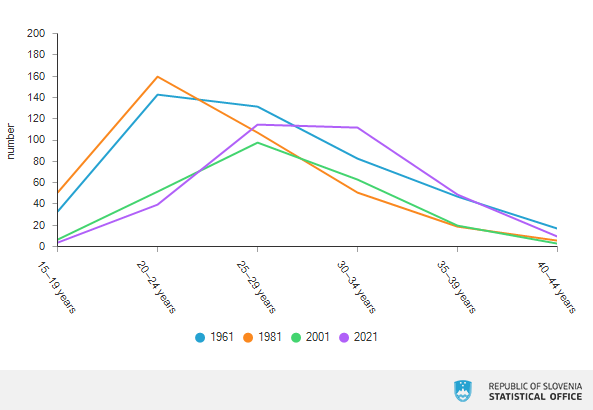 METHODOLOGICAL NOTE
Final detailed data are already available in the SiStat Database, so the release Births, detailed data, 2021, announced for 30 June 2022, will not be published.
When making use of the data and information of the Statistical Office of the Republic of Slovenia, always add: "Source: SURS". More: Copyright.
SiStat
Methodological explanations
Quality reports