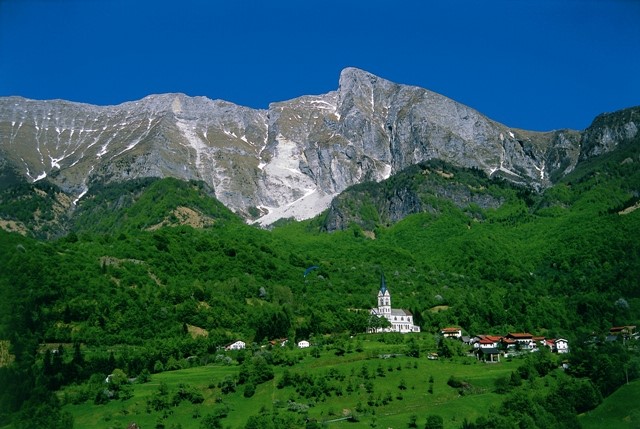 In terms of the area, the Goriška statistical region covers almost the same surface area as the Osrednjeslovenska statistical region, but it has almost five times less population. In 2020, the population of this region represented 6% of the population of Slovenia as a whole. The region is among the least densely populated regions with on average 51 people per square kilometre. The mean age of the population in this region (45.1 years) was the second highest behind Pomurska (45.8 years). This means that the age structure of the population was less favourable. The share of the population aged 65 or more was the highest among regions at 23.2%. The aging index was also among the highest: 156. This means that per 100 children (i.e. persons under the age of 15), there were on average 156 persons aged 65 or more. In the epidemic year 2020, the region recorded the lowest excess mortality; 6% more people died than the average of the past five years. The share of live births outside marriage was the second lowest (51%). The share of children aged 1–5 included in kindergartens was the lowest (76.4%). As regards the number of students per 1,000 population (40), the region ranked first.

In 2020, inhabitants of the Goriška region, as well as inhabitants of Gorenjska and Jugovzhodna Slovenija, assessed general satisfaction with their life with the highest average score, i.e. 7.6 (out of 10). In Goriška the share of older dwellings is the highest in the country. About 35% of them were built before 1945, which is about 15 percentage points more than the national average. Dwellings that were in bad condition (problems such as a leaking roof, damp walls/floors/foundation, or rot in window frames or the floor) were inhabited by 26% of households, which was one of the highest shares.

In 2020, 17% of persons in employment in this region worked outside the region of residence. Only one region, Osrednjeslovenska, had a lower rate, namely 10%. The LFS unemployment rate was the lowest in the country at 3.1%. The number of passenger cars per 1,000 population was the highest in the country (621), as was their average age (12 years). In 2020, 542 kg of municipal waste per capita was generated, which was 53 kg over the national average; 67% of municipal waste was collected separately, which is less than the national average. Households in the region were supplied 41.7 cubic metres of water per capita from the public water supply. The share of wastewater treated before discharge from the sewage system (58.5%) was the third lowest.

Of all regions, Goriška has the largest area of vineyards, almost 4,000 hectares or 26% of the nation’s total.