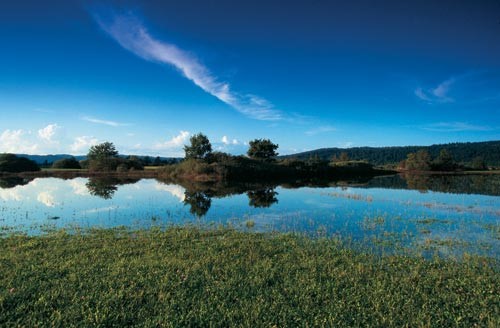 The Primorsko-notranjska statistical region had the lowest share of Slovenia’s population in 2020 (2.5%). The region also stood out with the lowest population density (37 persons per square kilometre). A natural decrease was recorded in 2020 (-3.1 per 1,000 population), while net migration was positive (10.7 per 1,000 population). The share of foreign nationals in the population was 8.4%. Only the Osrednjeslovenska and Obalno-kraška statistical regions had higher shares of foreign nationals. The share of children born to unmarried mothers was the fourth lowest in the country at 53.8%. The mean age at death was 79.5 years. The infant mortality rate (i.e. the number of infant deaths per 1,000 live births) was the highest among the regions here (6.2).

In 2020, the highest employment rate was recorded in this region: 69.9% of the working age population were in employment. 42% of persons in employment from this region worked in another statistical region, a large majority of them in the Osrednjeslovenska statistical region. The difference between the employment rate for men and women in the region was the largest, 10.4 percentage points. Average monthly net earnings were the lowest in the country. They amounted to EUR 1,085, which was EUR 124 less than the national average. The region is among the weakest in terms of the economy. GDP per capita was the second lowest among the regions (EUR 15,372). This region contributed 1.7% to Slovenia's GDP. There were just over 4,600 enterprises operating in the region; each employed on average 3.5 people. In terms of the number of passenger cars per 1,000 population (601) and their average age (11.4 years) the region was second. Of the total amount of wastewater generated in 2020 in this region, 95% was treated before discharge into the public sewerage system. This was the second highest share among the regions.