The municipality lies in the Drava valley and extends on Kozjak hills and Pohorje mountains. The municipality strives for sustainable development. Rafters are very active here, which is also used for tourism purposes. 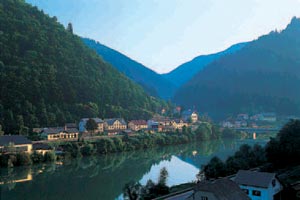 Municipality Podvelka, which is part of the Koroška statistical region, measures 104 km2; this ranks it 66th among Slovene municipalities.

The mean age of people in Podvelka was 43.1 years, which was higher than the national average (42.2).

Podvelka had 5 kindergarten. It was attended by 56 children or 56% of all children aged 1–5, which was less than the national average of 75%. In the school year 2013/2014 basic schools in Podvelka were attended by about 170 pupils, while various upper secondary schools were attended by about 90 pupils. There were 30 students and 9 graduates per 1,000 people in the municipality; in Slovenia the averages were 44 per 1,000 and 9 per 1,000, respectively.

Among people aged 15–64 (i.e. working age population) about 47% were persons in employment (i.e. persons in paid employment or self-employed persons), which is less than the national average of 57%.

The registered unemployment rate was 19.3%, which is more than the national average (13.1%). As in most Slovene municipalities, more women than men were unemployed.

In Podvelka, average monthly gross earnings per person employed by legal persons were about 21% lower than the annual average of monthly earnings for Slovenia; and net earnings about 16% lower.

About every other person in Podvelka had a car (52 passenger cars per 100 population); cars in this municipality were on average 9 years old.

In 2013, 218 kg of municipal waste per person was collected in Podvelka, which is 102 kg less than on average in Slovenia.