The municipality is one of eleven urban municipalities in Slovenia. It is bilingual because of the Italian national minority living in it. Natural conditions enable development of tourism, transport and growing of special vegetables. 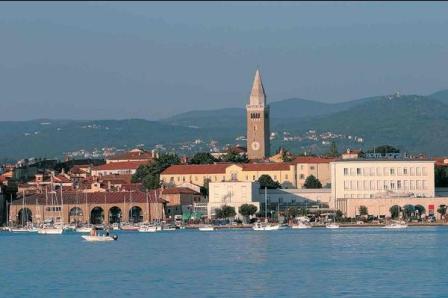 Municipality Koper, which is part of the Obalno-kraška statistical region, measures 311 km2; this ranks it 7th among Slovene municipalities.

The mean age of people in Koper was 42.4 years, which was higher than the national average (41.6).

Among people aged 15–64 (i.e. working age population) about 61% were persons in employment (i.e. persons in paid employment or self-employed persons), which is more than the national average of 59%.

The registered unemployment rate was 7.5%, which is less than the national average (10.7%). As in most Slovene municipalities, more women than men were unemployed.

In Koper, average monthly gross earnings per person employed by legal persons were about 4% higher than the annual average of monthly earnings for Slovenia; and net earnings about 3% higher.

The value of gross investment in new fixed assets in the municipality (EUR 3,240 per capita) was higher than the national average (EUR 2,176 per capita).

About every other person in Koper had a car (57 passenger cars per 100 population); cars in this municipality were on average 8 years old.

In 2010, 451 kg of municipal waste per person was collected in Koper, which is 62 kg more than on average in Slovenia.