Total expenditure on social protection, standing at almost a quarter of GDP, up in 2019

EUR 10,720 million was spent on social protection schemes in Slovenia in 2019, which is 6.2% more than in 2018. The increase in total expenditure was marked the most by higher expenditure in the sickness and health care function, the old age function, and the family and children function.

In the total structure of social protection expenditure, in 2019 the share for the sickness and health care function notably higher 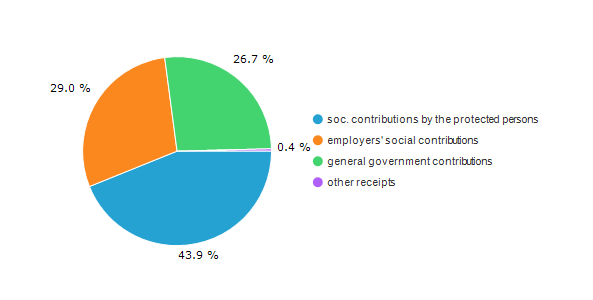 Source: SURS
METHODOLOGICAL NOTE
1. Data on the number of pension beneficiaries represent an additional module within the ESSPROS methodology. For the module the same methodological rules apply as for the core system (especially concerning the old age function and classifying into a certain function of social protection or in this case a pension category), except that this module does not include all programs, but only those which relate to pensions, i.e. programs 5 to 18. It should also be mentioned that the figures shown in this module do not correspond to the national pension categories because the coverage here is broader and there are other methodological features.
2. Final and more detailed data will be available in November 2021.
Visit our SiStat database.
SiStat
Methodological explanations
Quality reports

The number of 77-year-olds is increasing. This year SURS is also joining their company.