In 2018, every week 126 Slovenian citizens and 133 foreigners emigrated from Slovenia

The most common countries of previous residence for immigrants with Slovenian citizenship in 2018 were Germany and Austria (24% and 17% respectively), followed by Switzerland, the United Kingdom and Italy.

In 2018, a quarter (26%) of emigrants with Slovenian citizenship left for Austria; some other common countries of next residence were Germany (20%), Switzerland and Croatia.

Among foreign emigrants, the most common country of next residence was Bosnia and Herzegovina (24%), followed by Germany (12%), Serbia and Croatia (11% each).

Data on socioeconomic characteristics of international migrants will be published on 19 December 2019.

In 2018 another 46,277 changes of residence by 42,788 residents were recorded within settlements; statistically these are not counted as migrations. Within Ljubljana 14,600 residents changed their residence at least once, and within Maribor 5,299 residents did so.


The SiStat database contains the series of data on migration. The data series is completed with data for 2018. The latest data on international and internal migration, migration change and total increase are now available. A lot of data are available for several territorial levels.
Net migration, Slovenia 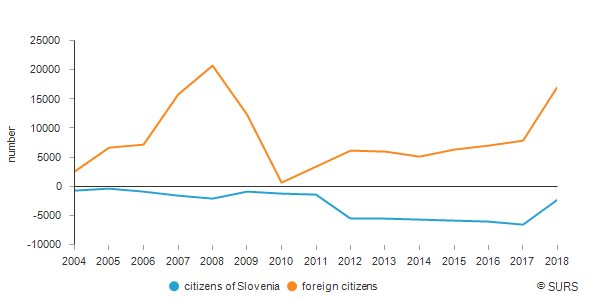