The publication Naš mali avto focuses on data on cars and presents the life-cycle of cars from manufacturing to the status of end-of-life vehicle and its processing.

SHARE RELEASE:
A car’s lifecycle starts in the manufacturing facility where the car is produced. Car industry in Slovenia in 2015 generated almost a billion euros of turnover with car sale. Most of the cars produced in Slovenia are exported, most of them to Germany, followed by France and Italy. Most cars are imported from Korea, Germany and France.

In 2015 just over a million cars were registered in Slovenia. In terms of the motorisation rate Slovenia was 9th in the EU-28.

Most of the car owners in 2015 were men. The most common car brand in Slovenia was Renault, followed by Volkswagen and Opel.

Cars in Slovenia are on average rather old. In 2015, most of them were over 12 years old.

To have a car is a luxury, but for many it is a must. And having a car involves costs. In addition to annual expenditure on using a car, expenditure on fuel and maintenance is also important. Nevertheless, as regards household expenditure on personal mobility, in 2015 Slovenia was at the top of European countries (16%).

In 2013, 86% of passenger kilometres were made by cars. Road transport is therefore a very large polluter and a significant environmental problem, representing 99% of total CO2 emissions from transport in 2014.

A car’s lifecycle ends when it can no longer serve us. The number of end-of-life cars is declining.

Publication is available on this link. The English version entitled Our Little Car will be published on 10 April 2017.
Household expenditure on personal mobility, selected EU-28 Member States, 2015 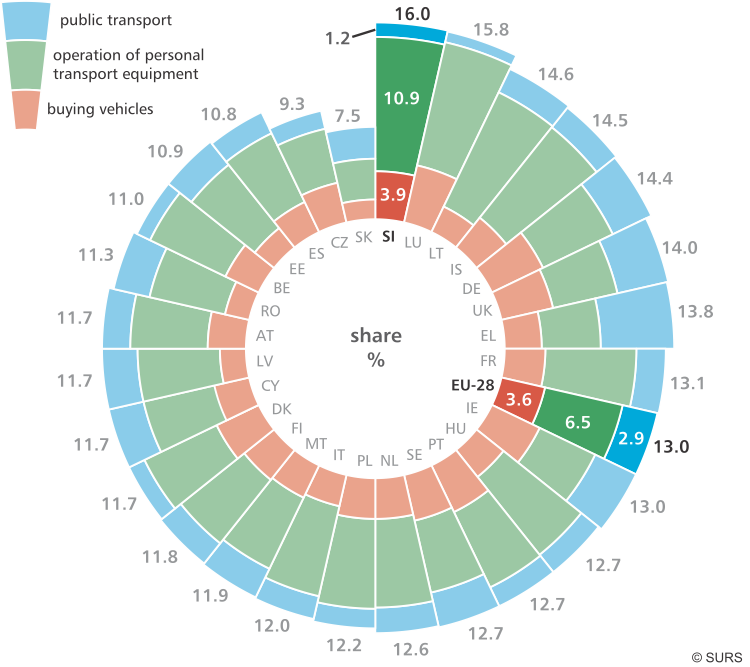 Source: EUROSTAT (http://ec.europa.eu/eurostat, 10. 2. 2017)
When making use of the data and information of the Statistical Office of the Republic of Slovenia, always add: "Source: SURS". More: Copyright.
SiStat
Methodological explanations
Quality reports