The International Day of Older Persons is marked by activities which focus on the elderly, their presence and the attitude towards them. Workshops and conferences are organised, old people’s homes invite visitors etc. The slogan “active and healthy ageing” is gaining importance.

Data reveal that people in Slovenia still retire relatively young
In the last few years we have seen the increasing number of beneficiaries of old age pensions, the increasing life expectancy at birth, the decreasing labour force and consequently the increasing expenses of the pension and disability insurance, which could affect the sustainability of public finance in the long run. All this gives rise to the need to change legislation on pension and disability insurance, thereby trying to ease the pressures on the expenses of the pension and disability insurance fund (especially by increasing the retirement age and lowering the pension percentages). Does this reflect in the statistics, and how?
According to the data of the Pension and Disability Insurance Institute of the Republic of Slovenia, there were on average 609,000 pensioners from the compulsory insurance in Slovenia in 2014 (a fifth more than in 2005). In the observed 10-year period the number of old-age pensioners increased the most (by a little more than a third, from about 315,000 to 426,000).
In the observed period, the average age at retirement did not change much, even though this would have been anticipated. Namely, in 2014 the main category of pensioners, i.e. old-age pensioners, on average retired at these ages: women at 58 years and 11 months of age (i.e. only 1 year and 8 months later than in 2005) and men at 60 years and 11 months of age (i.e. 9 months earlier than in 2005). Yet, in this 10-year period the average length of receiving the pension increased, which is in line with the life expectancy at birth indicator, which is also on the rise. The differences between the genders are clear: in 2014 men had on average been receiving their pensions for 16 years and 11 months (i.e. 11 months longer than in 2005), while women had been receiving their pensions for 23 years and 1 month (i.e. 3 years and 5 months longer than in 2005 and much longer than men).

In Slovenia poverty among the elderly is slightly lower
According to the latest data collected by SURS, in 2014 about 290,000 persons in Slovenia lived below the at-risk-of-poverty threshold, so the at-risk-of-poverty rate was 14.5%. Among these, there were 55,000 (19%) persons aged 65+, so their at-risk-of-poverty rate was 17.1% and it differed according to gender: for men it was just below 11% and for women it was twice as high: almost 22% (the difference increases with age). In comparison with the previous year, this rate decreased in the case of the elderly aged 65+ (by 3 p.p.). This is interesting, as – presuming that these persons are mostly pensioners – the average amounts of pensions started to decrease in 2012 and also the shares of average net pensions in the average net income decreased. Most likely the pension recipients had also other sources of income (when calculating the at-risk-of-poverty rate also the incomes of other household members are taken into account).

Education structure of older persons
In 2014 almost every ninth person in Slovenia aged 65+ completed tertiary education, while one in two completed basic education or upper secondary education. The data revealing that the elderly are included in various forms of (in)formal or non-formal education, training and cultural activities are interesting; for more see appendix. 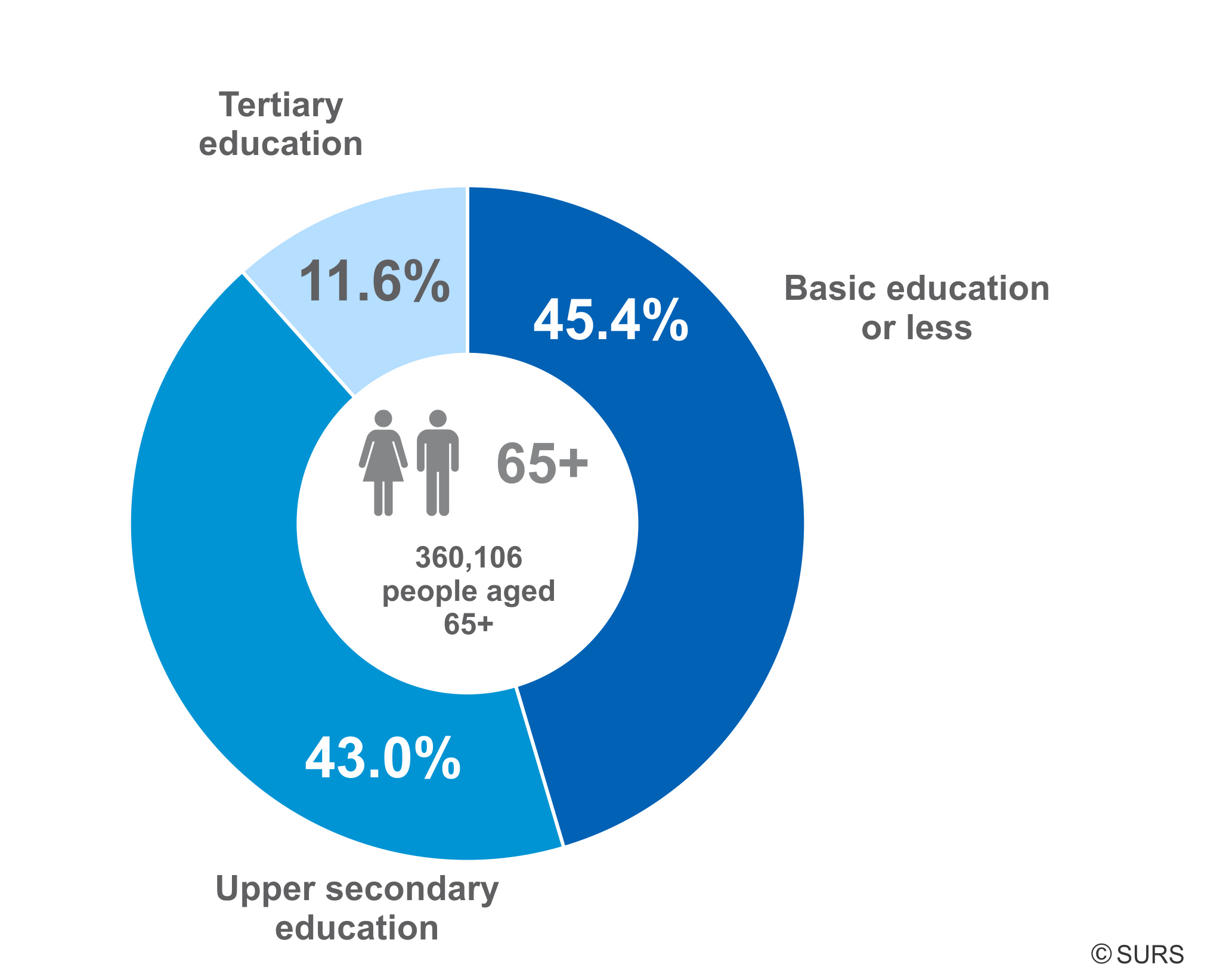