The confidence indicator was the same as in the previous month. Compared to January 2022 and the long-term average, it was lower by 12 p.p. and 3 p.p., respectively.

Overall order books and stocks of finished products indicators improved (the former by 2 p.p. and the latter by 8 p.p.), while the expected production indicator worsened by 8 p.p. Compared to 2021, confidence was lower in 2022, namely the average of the indicator was lower by 8 p.p. (decline from 8 to 0 p.p.).

Over a third (39%) of the enterprises reported uncertain economic conditions as the main limiting factor in their activity (11 p.p. more than in January 2022), followed by shortage of skilled labour (32%, 2 p.p. fewer) and insufficient foreign demand (25%, 12 p.p. more).

The current capacity indicator was 82.8%, 0.9 p.p. lower than in October 2022. The assessment of current production capacities indicator decreased by 2 p.p., while the new orders indicator improved by 4 p.p. Assessment of the competitive position remained the same on the domestic market and deteriorated on EU markets (by 2 p.p.) and on non-EU markets (by 3 p.p.).

The confidence indicator decreased by 4 p.p. at the monthly level after two consecutive months of growth. It was 7 p.p. above the long-term average, while at the annual level, it was higher by 5 p.p.

The deterioration of confidence was influenced by a decrease in the sales and expected sales indicators. Compared to 2021, confidence was higher in 2022, namely the average of the indicator was higher by 15 p.p. (growth from 5 to 20 p.p.).

Most construction enterprises stated high cost of material as the main limiting factor in their activities (55% of enterprises, 1 p.p. more than in January 2022). This was followed by shortage of skilled labour (49%, 6 p.p. more) and high cost of labour (40%, 10 p.p. more).

The confidence indicator decreased slightly at the monthly level (by 1 p.p.), while at the annual level it was higher by 3 p.p. and 7 p.p. higher than the long-term average.

The indicator was lower mainly due to lower expected demand. The average confidence indicator for 2022 was 17 p.p., 9 p.p. higher than in the previous year.

Monthly changes in the value of confidence indicators, Slovenia, January 2023 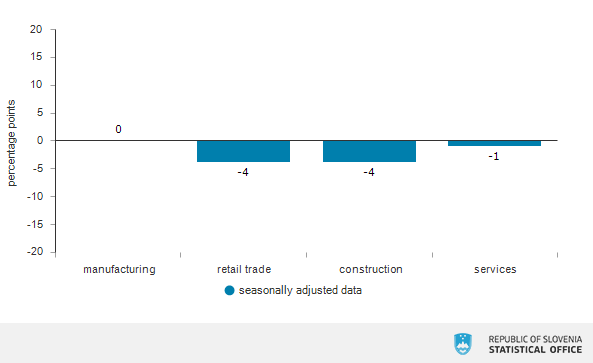 New in the SiStat Database: High-growth enterprises in Slovenia in 2021