Non-financial corporations operated with a surplus of EUR 327 million or 0.6% of GDP, which was significantly lower than in the previous year when it stood at 3.4% of GDP. The gross investment rate of non-financial corporations (ratio between gross fixed capital formation and gross value added) increased from 20.3% in 2020 to 21.4% in 2021 and was very similar to the gross investment rates in the last three years before the outbreak of the COVID-19 epidemic. Anyway, this is still a lower rate than the EU-27 average (2021: 24.1%) and the euro area average (2021: 23.7%).

Financial corporations ended 2021 with a deficit of EUR 67.2 million, while in 2020 they generated a surplus of EUR 44 million. In 2021, restrictions on the distribution of profits were relaxed (introduced in 2020 due to the COVID-19 epidemic), so financial corporations paid out significantly more dividends. There were also more payouts from reinvested earnings on foreign direct investments in Slovenia.

In 2021, the government sector generated a deficit of EUR 2,440 million or 4.7% of GDP. It was EUR 1,192 million lower than in the previous year. Expressed as a percentage of GDP, deficit decreased by 3 percentage points (2020: 7.7% of GDP). Revenue growth (14%) exceeded expenditure growth (7%), but total government sector expenditure remained higher than its total revenue. Tax revenues, namely value added tax and income tax, had the greatest impact on growth in total revenues, while expenditures for social transfers had the greatest impact on growth in total expenditures. Expenditures for subsidies were significantly lower compared to the previous year. They were extremely high in 2020 due to mitigating the consequences of the epidemic.

After the peak rate reached in 2020, the gross household saving rate lower

Gross national income up by 10.2% over the previous year

The amount of the gross national income is the one that affects the amount of contribution that Slovenia pays into the European budget. In 2021, it amounted to EUR 51,471 million, which is 10.2% more than a year earlier. 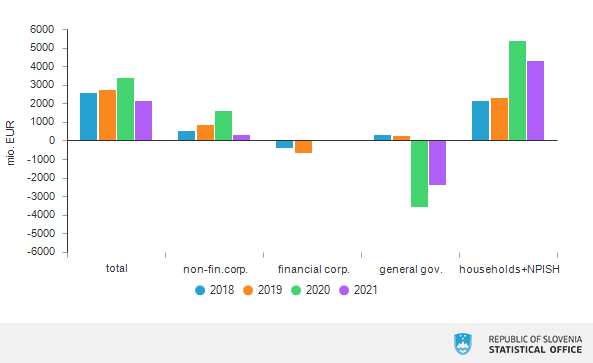 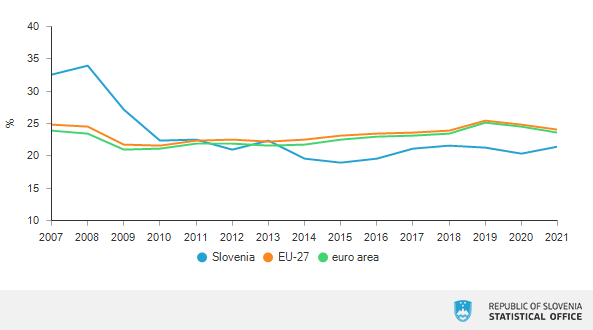 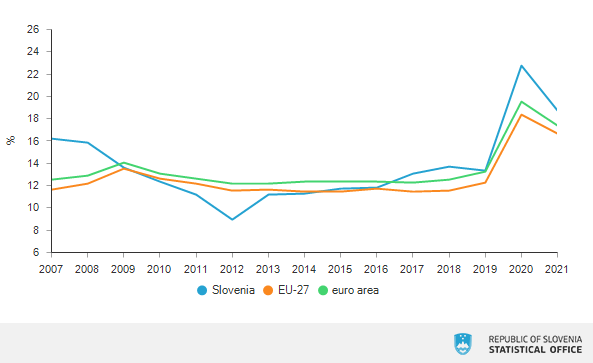 METHODOLOGICAL NOTE
This release presents data for the household sector together with the sector of non-profit institutions serving households (NPISH). For the sake of comparability with the EU-27 indicator and the euro area indicator, we take into account households together with the NPISH when calculating the indicator of the gross household saving rate. The saving rates for the EU-27 and the euro area are only available for both sectors together. The value of NPISH data has a small, negligible impact on the total value with households.

In accordance with the regular revision of GDP, government accounts and the rest of the world accounts, we are also publishing revised annual non-financial sector accounts for the 2018–2020 period.