At the monthly level, confidence indicators improved in all four economic sectors, the most in services.

At the monthly level, the confidence indicator increased by 4 percentage points (p.p.). Compared to November 2021 and the long-term average, it dropped by 12 p.p. and 5 p.p., respectively.

Improvement in the confidence indicator at the monthly level was influenced by expected production and overall order books (the former by 6 p.p. and the latter by 5 p.p.), while the stocks of finished products deteriorated by 1 p.p.

A quarter of manufacturing enterprises plan to invest more in 2023

After three consecutive months of decline, the value of the confidence indicator increased by 3 p.p. at the monthly level and by 11 p.p. at the annual level. Compared to the long-term average, it was 5 p.p. higher.

The increase was mainly influenced by the improvement of expected sales and sales indicators (up by 12 p.p. and 8 p.p., respectively).

One component of the construction indicator improved and the other declined, namely overall order books improved by 9 p.p., while employment expectation declined by 1 p.p.

After two consecutive months of decline, the value of the confidence indicator increased by 5 p.p. at the monthly level, and by 3 p.p. at the annual level, and was 9 p.p. above the long-term average.

The improvement of the confidence indicator was influenced by all three components of the indicator: demand, expected demand and business situation (by 6 p.p., 5 p.p. and 4 p.p., respectively).

Monthly changes in the value of confidence indicators, Slovenia, November 2022 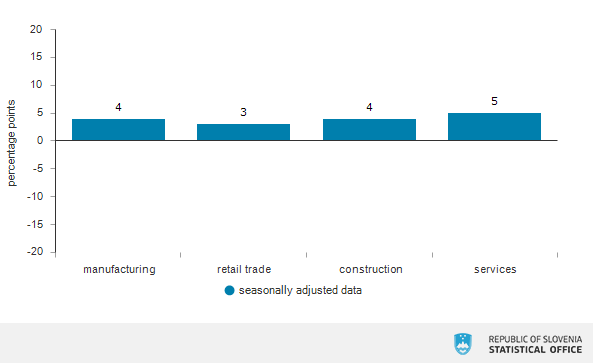