Final energy consumption in Slovenia slightly increased in 2018 (by 0.6%) in comparison with the previous year. 21% of energy was consumed in households.

In 2018, domestic energy production in Slovenia was 148,000 TJ. Nuclear energy accounted for the largest share with 42%, followed by renewable energy sources (including hydro energy) with 32% and coal with 25%. Less than 0.5% of energy was produced from other sources. With domestic energy resources, Slovenia met 52% of its domestic energy demand, while the remaining amount was imported.

The largest consumer was the transport sector

In 2018, final energy consumption in Slovenia was 211,000 TJ. Consumption in the transport sector represented the highest share (40%). The second highest consumer was manufacturing and construction with 27%, followed by households with 21% and by other use and agriculture with 12%.

Petroleum products represented the highest share in final energy consumption (47%), followed by electricity with 24%, renewable energy with 13%, natural gas with 12%, heat with 3% and solid fuels with 1%.

In 2018, final energy consumption in households in Slovenia was 44,600 TJ. Most of the final energy in households was consumed for space heating (61%), followed by lighting and electrical appliances 17%, water heating also 17%, cooking 4% and space cooling less than 1%.

Among energy sources consumed in households wood fuels prevailed with 39%, followed by consumption of electricity with 27%, natural gas with 10%, extra light heating oil with 9%, district heat with 7%, ambient heat (utilized by heat pumps) and liquefied petroleum gas both with 3%, and solar energy with 1%. 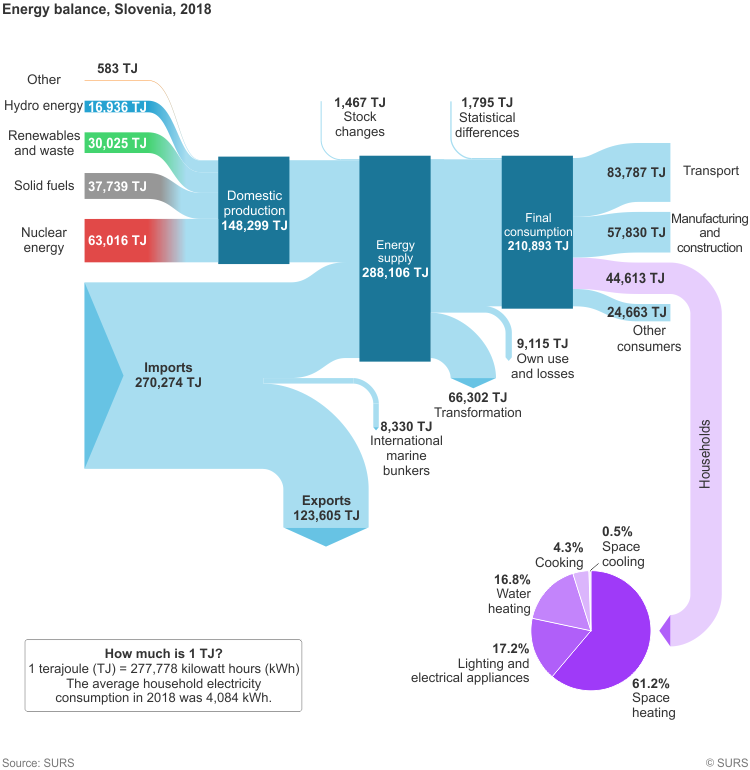 The most important renewable energy source in Slovenia is wood